Good, bad, right, wrong, legal, illegal—none of that mattered when it came to family. Family was and always would be number one.

Catarina Lambardoni stayed on the legal side of the family businesses by running Lambardoni Enterprises. Professionally, she was beyond successful. In her personal life, however, she was not, having just walked in on her boyfriend cheating on her.

Jag Maratelli, the boss’s right hand, worked extremely hard to sustain his position in the family and honored it with his life. When he was summoned to the East Coast for an unexpected meeting, a chance encounter with Catarina and one look into the fire within her made him a very determined man.

The chemistry between the two scorched hot, and Jag had been with enough women to know Catarina was something special, something he couldn’t allow himself to walk away from. Life had other ideas, though, when a betrayal in the family sent him two thousand miles away from her while danger lurked closer than anyone realized.

Would their connection be strong enough for both of them to pursue more?

Or would people and events from the past and present make that choice for them?

Blood and Loyalties By Ryan Michele ©Ryan Michele 2015
Chapter 1—Catarina
“You stupid fucking bitch!” Antonio seethed like a pussy as he looked up from the filthy-ass floor of the bar, holding his throbbing crotch.
I laughed, tossing my head back for good measure. Bitch was the worst he could come up with? I had been called worse than that at work when I lost a client’s millions on a bum deal.
I lifted the pointed heel of my black, stiletto boot and plowed it hard into his windpipe, crushing it as he gasped for breath, his eyes wide with fear. He needed to be taught a lesson about fucking over a Lambardoni. It didn’t come without repercussions, and I wanted to be the one to teach him.
Unfortunately, I knew my bodyguards had called my brother Val. They always did when shit with me happened, and if I didn’t get on with it, Val would ruin all my fun. I was more than capable of handling this weak, pathetic asshole. Val should know that. He and my other brother D had trained me to fight and shoot a target with precision, but something about being “the sister” gave them the right to be overprotective and overbearing, even if I was older than both of them.
As I removed my foot, one of his hands wrapped around his throat as the other continued to grip his aching crotch. The stupid fucker didn’t know whether to grab his balls or neck, his arms flailing in both directions as he rolled from side to side, trying to ease the pain. He gasped for breath, the look of confusion in his eyes laughable. I did pack one hell of a powerful knee thrust, though. No doubt his balls were shoved so deep inside he could taste them in his mouth.
Wicked thoughts crept in my head. Using my best weapon of the moment—the hot ass boots my cousin Kiera had insisted I wear for the night—I picked a spot on his rib cage and began kicking it over and over, plowing into him, hoping like hell the blows would crack the fuckers. It was the least he deserved.
I moved with him at each turn he tried to make, hitting him dead in the same spot. He grunted and attempted to bat my foot away with his hands as he tried to hold himself at the same time. His less than stealthy attempts only made him look like a bigger pansy-assed bitch. It was amazing how much actual joy I felt from watching him struggle.
He tried to curl up in the fetal position, the dirt from the floor coating his clothes and both sides of his face. He groaned, taking each hit, but it didn’t feel like enough. The fucker didn’t even have the balls to really fight back.
“Catarina, what the hell happened?” Kiera said loudly at my side, trying to compensate for the music blaring in the distance. She was my cousin, best friend, and pretty much sister in every way that counts. Regardless, my focus stayed on the fucker on the floor as I stepped farther back from his withering body.
When Kiera and I had decided to come out to the club to let off some steam from a brutal week at work, I hadn’t realized I would be getting a hefty workout like this instead of on the dance floor.
I stared down at the man I’d thought loved me, who had said I was the one for him. The only one. Stupid. I should have known by now that the only reason men found any interest in me was because of my father and family. Each one seemed to want that pivotal “in” to the business, and for some reason, they thought I could get it for them.
I knew Antonio wanted to move up in the ranks with his family, but it wasn’t in the cards for him. That right there should have been a huge red flag for me, but I had trusted him when he told me if he couldn’t move up in his own family, he didn’t want to move up at all.
Lies. All fucking lies. 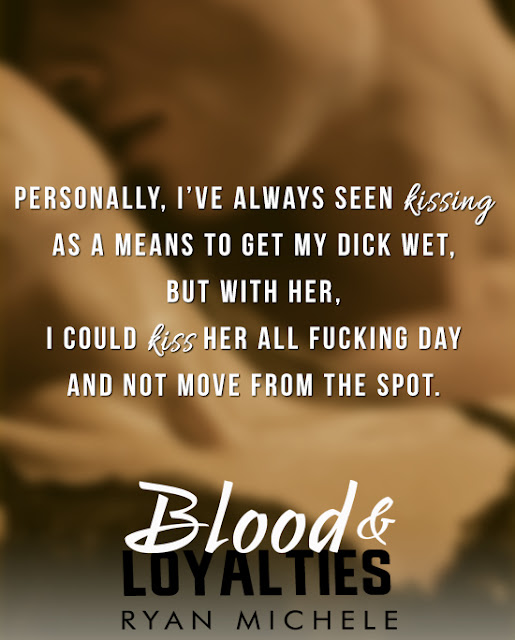